Roots Rated describes today’s route over Wheeler’s Pass, “The Wheeler National Recreation Trail is one of the best places in the White River National Forest to hang out with wildlife and get a slice of alpine glory all to yourself. Following the ridgeline of the Tenmile Range, this steep, high-mountain route in the Colorado Rockies has breathtaking views of both Breckenridge and Copper Mountain. Despite being a mixed use trail open to mountain bikers, equestrians, and even the occasional trail runner, it’s more likely that you’ll pass a marmot up there than another human.”….

Unless you’re one of the 600 dumb bastards who paid to drag a mountain bike up and over 3 Wheeler passes today.

I’m going to try and keep this short. Lot’s of pics kind of entry, because, well to be honest, we’re beat and could use a visit from the ether bunny tonight.

I did manage to choke a beer down following today’s stage, in case you were wondering. More a result of missing the second aid station and doing my best to make weight for tomorrow’s stage. I’d have drank a cup of warm pee I was so thirsty.

But I’m getting ahead of myself.

Let’s rewind and go from the start, photo collage style to hopefully keep this short.

6:30am we’re trying to figure out how to make the hike-a-bike more tolerable.

If you haven’t been following this circus, you may wonder about why we’re stuffing trail shoes in our camelbacks. This will help.  but mostly, because pushing a bike at elevation for hours on end, kinda sucks in mtb shoes. Cliff notes:this worked well.

We were still smiling.

We hit the road. Evidently BreckEpic made note of my recent snarky comment about a 60sec warmup followed by climbing, and put us straight into some singletrack climb, literally right out of the parking lot. I watched Coop and Destructo roll away and within half a mile heard Jena ask “take a log off?”

Of course, the single track eased right into the photo below, 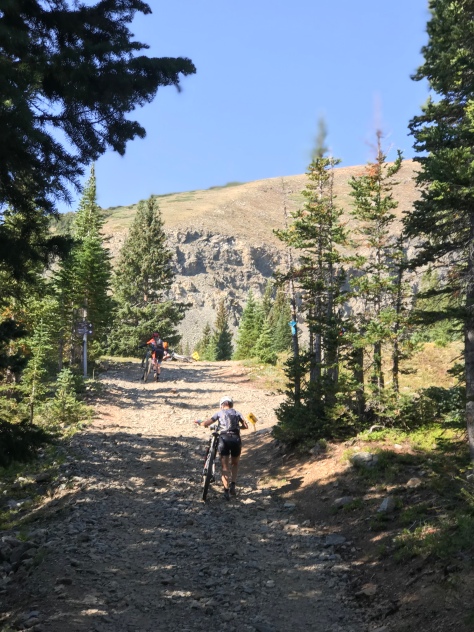 Which is just the tip of the ‘ol hike your bike for hours iceberg, and today’s theme.

This was mile TWO.

The first aid station was at mile FOUR.

Reminder. Today’s stage sent us directly upto and over 12’k to Wheeler’s Pass, where we would spend the majority of the day.

Of course, getting to the first summit, that’s the trick. 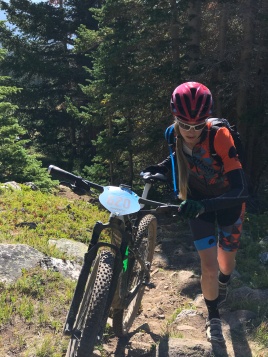 Following the first aid station, our form dialed-in from a week of hiking our bikes, we set off. 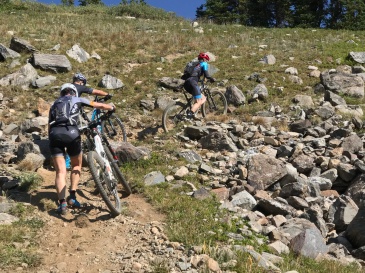 The great thing about walking at 0.025mph, at elevation, if that you have plenty of time to take photos while you’re gasping for air.

This is the hike your bike face for 2 hours to the first ascent, Wheeler pass.

The slog to the second summit. Was a bear.

I have to give a shout out to our coach @mathenyendurance, over the last 6 months, he’s been great in getting us as prepared as possible. Some things you can’t prepare for though, like not having brake pads after 4 days of choke-holding the brakes when flying in from 12k’.

I discovered early this morning as we hit the start line that my pads were shot. We were about to roll and the event mechanic was like, “you’ve got half a mm or so”, followed by, “I wouldn’t do today’s descent on those”…

Daniel saved my ride. There were not Shimano pads to be found. Of course, I did bring some, but they were in my toolbox back at the house, 1/4 mile away.

Daniel was running sweeper today, so he offered to goto the house and grab the pads, and then ride-up Wheeler and try to catch me before the descent.

And then he did.

He caught me just as I was changing shoes and getting ready to drop down Wheeler to CO trail. He swapped my pads and bled my brakes in like 3 minutes, gave me some tips on the descent, a bonk-breaker, and off he went, back to sweeping.

I think the dude is probably one of the nicest human beings I have ever met, and an amazing athlete, coach, and Father.

If you need a coach- click thru and check him out.

But enough about that spider monkey, I’ve got to get to bed!

The hike-a-bike went on for nearly FIVE HOURS.

I ran out of water before the final summit.

The darkness started creeping in.

Except for one tiny problem.

We’re not pro mountain bikers. The drop in and first few miles were SKETCH AF.

I crashed balls within 3 minutes.

We walked with our bikes some more.

The total dive in was a little over 6 miles. Super steep, blown out and dry. We were able to ride a mile or two closer to the bottom.

Then unknowingly, we missed our 2nd aid station at mile 19.

We ended up riding thru a section of the course and ended-up adding a little of our own.

^^^this is not the course you are supposed to be riding on.

We rolled into the finish just a hair under 7 hours. Dehydrated, hungry, sore everything.

I guzzled two bottles of water. We offered to go back out, just don’t take us out of the buckle. We are so gawdamn close.

Their response was surprising. We would not be going back out. We had met the expectation for stage 5.

The emotions came out.

edit: you can view today’s stage over Wheeler’s pass here

This site uses Akismet to reduce spam. Learn how your comment data is processed.