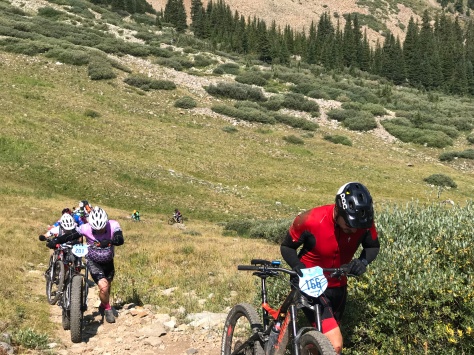 Breck Epic stage 3 took us up over the continental divide, twice, today.

We found out the hard way. The elevator was broken.

So we walked our bikes.

Going up over 12k’ was pretty special. Doing it twice in one ride, was kind of mean.

We pushed our bikes today.

From the parking lot, we managed a reasonable pace. We did the first 5.5 mile climb in an hour. I was only partially anaerobic trying to hold Jena’s wheel, as we entered the first section of rocky  doubletrack.

I only walked for a few minutes on this stretch, and considered this a major victory.

Then we hit the base of the French Pass trail, or what will be referred to from here on in our inner circles, as the trail that destroyed Ben’s shoes.

The French Pass trail gains ~2500′ in a little over 2 miles.  Look at the photo above. That behemoth is what we rode our bikes into. Well, we were riding at the base.

It gets steep, quickly. Too steep to ride. Not much oxygen to breathe. The trail is more like a rut with grass high walls. Nearly impossible to ride for us mere dirt mortals.

We spent the next 1:25 crawling with our bikes up to the summit. Our strategy became to take 15 steps pushing the bike. Then take 15 seconds to recover. Then repeat.

The reward was worth it though, as we scrambled to get a rain jacket on before the plunge back down. 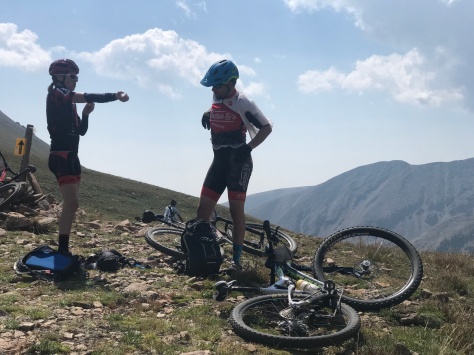 The dive down from the French Pass summit was one of those descents that is equally invigorating and terrifying. Sorry, no pics, but a good case of jelly arms from the rattle of the rough drop in.

Which brings me back to the mention of Ben’s shoes… 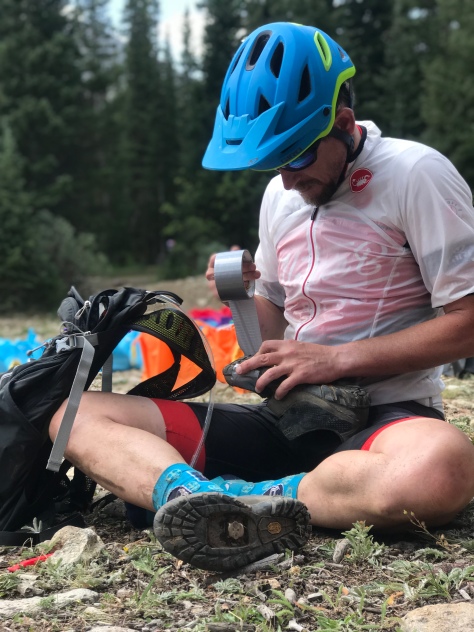 Too be honest, we’re not sure when, but it was clear that his little piggies were ready to break out. Fortunately someone at the aid station had some duct tape, and violà, instant shoe repair.

The reward for climbing over Georgia Pass, the 4 mile descent. Pretty sweet. Thankfully the ground was okay after Ben assaulted it after hooking a small pine.

Unfortunately his other shoe could not say the same.

Look at those glorious dancing shoes. I mean, you can’t make this up. The sole from the other shoe came part.  Thankfully there were some hikers at the bottom of the Georgia Pass descent that had, yup, you guessed it, some more duct tape (black this time, matchy matchy).

It’s getting late here, so I’m going to fast forward thru the rest of the awesome suffering.

and what seemed like the longest 2 mile finishing stretch.

Sidenote: two of our friends are wrapping-up their BreckEpic 3-day race today. Jena and I were glad to spend a little time with both Eric and Ben this week. We’ll miss you guys these last three stages.

BreckEpic Stage 4 is on tap in less than 12 hours. Aqueduct.

ps – check out this video recap of day 3!

This site uses Akismet to reduce spam. Learn how your comment data is processed.